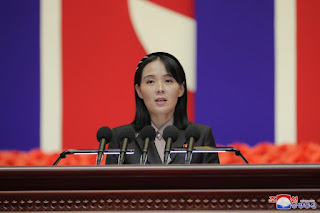 The Association For the Study of Songun Politics UK (ASSPUK) , the British Group for the Study of the Juche Idea(BGSJI), the Korean Friendship Association of the UK (KFA UK )  ,and the British Solidarity Committee for Peace and Reunification in Korea (BSCPRKP) issued a statement in support of the press statement of comrade Kim Yo Jong vice department director of the Central Committee(CC) of the Workers Party of Korea(WPK) that was issued on the 24th of November ;

On the 24th of November comrade Kim Yo Jong issued a press statement which strongly took issue with the stated intention of the south Korean puppets to try and impose  so-calle d'independent sanctions ' on People's Korea . This is indeed laughable because south Korea has no independence whatsover and south Korea is not in a position to impose sanctions on the Democratic People's Republic of Korea (DPRK ) . As comrade Kim Yo Jong  says  "Such frequent acts of the south Korean stooges dumbfound me".

Moreover , comrade Kim Yo Jong who is a forthright and straight talking person points out "If they think that they can escape from the present dangerous situation through "sanctions", they must be really idiots as they do not know how to live in peace and comfort.".  Indeed the south Korean puppet regime are complete and total idiots , they are out and out flunkeys and traitors to the Korean nation . We applaud comrade Kim Yo Jong for calling a spade a spade and not a shovel .

The south Korean people should rise up against the idiotic puppet regime of Yoon and overthrow it , if they want to live in peace .

Comrade Kim Yo Jong rightly says " We warn the impudent and stupid once again that the desperate sanctions and pressure of the U.S. and its south Korean stooges against the DPRK will add fuel to the latter's hostility and anger and they will serve as a noose for them"

We support the warning given by comrade Kim Yo Jong  . The south Korean puppets should cease at once their provocations against People's Korea and abandon silly schemes for sanctions and the like against the DPRK .