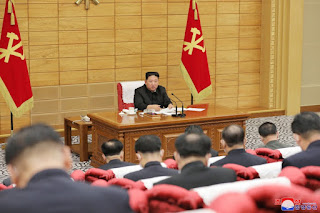 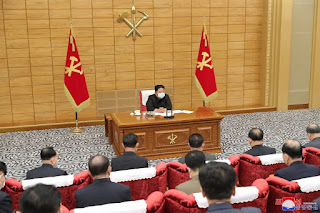 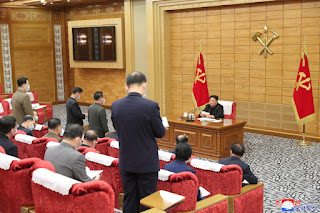 Pyongyang, May 14 (KCNA) -- The Political Bureau of the Central Committee of the Workers' Party of Korea (WPK) convened a consultative meeting at the office building of the Party Central Committee on May 14 to overhaul the maximum emergency epidemic prevention system under operation and take additional political and practical measures.

Present there as observers were officials in the state emergency epidemic prevention sector and a leading official of the Ministry of Public Health.

The Political Bureau heard a report of the state emergency epidemic prevention headquarters on the spread of disease as of May 13.

The report referred to the data on the spread of disease in every region and unit and to the characteristics of the progress of disease, and notified that in most cases, the loss of life was caused by mistakes like overmuch taking of drugs, bereft of scientific medical treatment.

The Political Bureau discussed political and practical measures to rapidly curb and control the nationwide spread of disease, so as to firmly take the strategic initiative.

The consultative meeting focused on the issue of timely supplying reserve medicines, which would be urgently released as required by the maximum emergency epidemic prevention system.

It confirmed again practical procedures to make sure that the reserve medicines are timely and exactly conveyed to patients by mobilizing all the state means and forces for transporting and supplying medicines needed.

It discussed in depth ways for minimizing the losses in human lives by reasonably applying scientific curing tactics and methods to different patients including fevered persons with special constitutional conditions, and for timely coping with the disease spread while watching more minutely its progress.

The respected General Secretary said that it can be said the spread of malignant disease comes to be a great upheaval in our country since the founding of the DPRK along with the worldwide spread of COVID-19 which gets very serious, adding that we can surely overcome the crisis if we do not sway in carrying out the epidemic prevention policy but keep the strong organizing ability and control based on the single-minded unity of the Party and the people and intensify the epidemic prevention campaign.

Analyzing the nature and source of the crisis in a scientific way, he said that the current situation is not an uncontrollable spread among regions but the spread within locked areas and relevant units, and underscored the need to cherish the conviction for overcoming the malignant disease within the shortest span of time as we get to know from the smooth progress of most courses of disease.

Stressing again the rationality and efficiency of the initiative and decisive regional-blocking and unitary-isolating steps taken by the Party and government, he called on the emergency epidemic prevention units at all levels to more scrupulously organize the operation for and command over the epidemic prevention work of their regions and units to surely reverse the spread of disease.

In order to tide over the present public health crisis quickly, it is important to improve the scientific epidemic prevention awareness of all the people, he noted, calling upon the curative and preventive organs and other relevant organs to scrupulously organize the work for informing a broad section of masses of knowledge needed for prevention and treatment of epidemics and, at the same time, to produce diverse multi-media promoting the understating of the masses and widely disseminate them through mass media.

Noting that the public health crisis facing us is also attributable to the incompetence, irresponsibility and least role of the party organizations in the epidemic prevention work, he said that officials of the Party organizations at all levels, who know well before anyone else about our Party's public health and epidemic prevention policies, should go deep among the masses who are suffering difficulties, share joy and sorrow with them and always become the competent pioneers and kind explainers to firmly ensure the good chance of winning the epidemic prevention campaign.

He also called upon the Party organizations at all levels to turn out resolutely in the campaign for defending the people with boundless devotion and invariable loyalty to them to always become the advancing group, shock brigade and bulletproof wall in the present acute anti-epidemic war.

The virtues and feelings of helping and taking care of each other which prevails our society in any difficulties are the key to and guarantee for the great victory in the epidemic prevention campaign which is more powerful than any latest medical technologies, he said, calling upon all the Party organizations to scrupulously conduct the organizational and political work so that our best communist virtue and beautiful traits, which no one on earth can possess or imitate, are given fuller display in the present difficult and rigorous epidemic prevention campaign.

Noting that it is high time for our Party Central Committee to prove its leading role once again before the difficulties of history, he said that it is urgent for us to more deeply realize for what we are needed and for whom we fight at the cost of our lives and that our Party will bravely discharge its important responsibility and duty and take full responsibility for the security and wellbeing of the country and people by displaying boundless loyalty and devotion, and repeatedly expressed his determination and will to win a great victory in the epidemic prevention campaign without fail.

Saying that he was donating reserve medicines prepared by his family to the Party committee of the office building with his resolution to always share the destiny with the people and with an earnest prayer that peace and laugh would settle again in all families across the country at an early date, he suggested to the Party committee sending the medicines to a family in difficulty.

The consultative meeting discussed such issues as taking practical measures to quickly strengthen the material and technological foundations of the public health sector and taking legal measures to strongly strike all negative deeds hindering the emergency epidemic prevention work. -0-