Commentary on Britain's shameful role in the Korean War or Fatherland Liberation War of the 1950s-ASSPUK, JISGE and UK KFA special article by Dermot Hudson 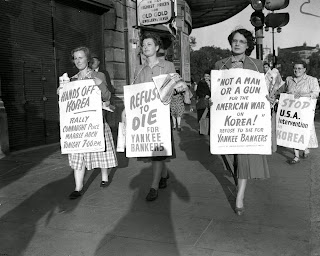 Recently the right wing reactionary media in the UK including the reptilian BBC have made a bit of a fanfare about the participation of British troops in the Korean War or Fatherland Liberation  War of the 1950s. Recently the south Korean puppets made a big deal about opening a bridge costing over 1 million pound(surely the money would be better spent on south Korean schools and hospitals?) in memory of the Gloucester regiment of the British army that fought in Korea(the so-called "Gallant Glosters who were anything but gallant). It is breathtaking the south Korean puppets should commemorate this very shameful episode and put up a monument to what were basically their oppressors who came to the land of Korea uninvited(and unwanted by the Korean people) to fight on behalf of American imperialism. It is surely not a coincidence that such a fuss is being made at a time when the Royal Air Force of Britain has taken part in war exercises with the Japanese "Self-Defence Force " airforce against the Democratic People's Republic of Korea (DPRK) and plans to take part in the so-called "Invincible Spirit " war exercises against the DPRK from November 4th to November 10th.

The British role in the Fatherland Liberation War was truly shameful .The UK was one of 15 satellite states of the US that sent troops to fight against the Korean people . The other countries that form the roll of dishonour and disgace are :Luxemburg, Netherlands, Belgium, Greece  France, Colombia, Turkey, New Zealand ,Canada, Australia , South Africa , Ethiopia , Thailand and the Philippines(Japan participated in the Korean War secretly). It is significant that the UK found itself fighting not only on the same side as US imperialism but with Apartheid South Africa, Colombia of the death squads, fascist Greece , Haile Selaissie's Ethiopia and other very reactionary regimes against an independent , progressive ,democratic and anti-imperialist government . Thus the Korean war was a totally reactionary one that held back the liberation struggle of the Korean people and the reunification of Korea.
Indeed the British role in Korea for the past 150 years has been a most shameful one. It was Britain that secretly helped Japan to invade Korea and colonise Korea.
The government  of Clement Attlee  , which is praised in some quarters but  was actually responsible  for surrendering Britain's independence by taking the UK into NATO  and  also purging communists from the civil service ,was a willing  accomplice in the aggression against the Korean people. Attlee sent young men to fight in Korea against the Korean People's Army commanded by the great leader Marshal KIM IL SUNG. Basically British troops were turned into cannon fodder and mercenaries for US imperialism. Attlee(Labour ) and Churchill(Conservative) sold the lives of British young men for a measly handful of US dollars. In fact in order to pay for the cost of sending the troops to Korea prescription charges were increased.
Among the  British forces sent to the Korean front was the Royal Ulster Rifles which had Suppressed the Irish people and committed many atrocities during the northern Ireland troubles. The British Army held back the reunification of Korea in the 1950s and also held back the reunification of Ireland.
As Julian Tunstall who served in the 1st battalion of the Middlesex Regiment of the British Army pointed out  in his book "I fought in Korea "  many of the British conscripts did not want to fight in Korea , as Tunstall said "Well if they want a war let them have one:let 'em fight it out " we said "But we don't want their war " 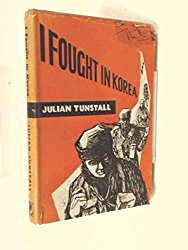 Tunstall describes graphically  the real nature of British imperialism and US imperialism i
" In the nine months I spent in Korea I felt most deeply about the outright discrimination against Koreans,whether in the north or in the south,by the white men of many Western and allegedly more civilised nations.Secondly, I saw a process of destruction in which there was no attempt to confine the war to what is usually demanded by military nessecity...Officers gave such orders as 'Shoot everything in White ' and 'Take no prisoners ' . Since 'everything in white includes  virtually every Korean civilian ,it is not surprising that  the greatest number of casualities  in the war were civilians..
I will regret that I went to Korea to fight the people'.
Tunstall also details  how those Koreans who helped the British forces either as translators or workers received nothing in return.
The British troops basically fought against the liberation of south Korea by the Korean People's Army and helped to prop up the reactionary and fascistic puppet regime of Sygnham Rhee that had been on the verge of collapse just before the Korean War. The British troops fought to "rollback " socialism and national liberation and to bolster the oppressive and exploitative rule of the south Korean landlords and capitalists. This is a crime, not something that should be celebrated or commemorated.
There should be absolutely no repeat of Britain's shameful past in Korea . Today the Tory government of Theresa May is now helping to prop up the decaying and reactionary puppet regime of Park Geun Hye. There should no British assistance to the south Korean fascist puppets whatsoever and all plans for the participation of British forces in joint exercises with south Korea and the US should be cancelled.
Dr Dermot Hudson
President Association For the Study of Songun Politics UK
Chairman Juche Idea Study Group of England
Official Delegate Korean Friendship Association
Chairman UK Preparatory Committee for the 2017 Gathering to Praise the Great Persons Born of Mt Paektu
Member International Committee for the Study of Songun Politics.

Difficult to believe so many Koreans had to die and Pyongyang was reduced to ashes by the US imperialist in the 1950s war.

Just for the deeds of a few snobs.