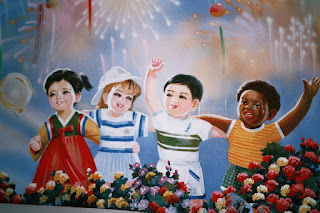 Again at the request from many friends of the DPRK we refute the accusation smade against the Democratic People's Republic of Korea by a so-called academic expert Brian Myers in his book the "Cleanest Race ". Myers teaches at a south Korean university and is a contributor to the imperialist press of the US.
Myers's comes out with absurd arguments about the DPRK in order to smear it and sling mud. His book claims that the DPRK is based on extreme racial nationalism and this is somehow rooted in Japanese fascism. This is a most profound insult to the DPRK and its supreme leadership. As everyone knows that the DPRK was born of the struggle to free the country from Japanese imperialism. Many anti-Japanese revolutionary fighters fell in the fight against
Japanese fascism . Indeed the great leader President Kim Il Sung lost many family members in the struggle against Japanese imperialism  and fascism, his father, mother, uncle, younger brother and cousin. How on earth  could the DPRK be based on something that its founding father fought against so hard for 20 years.
Japanese imperialism did a great deal of damage in Korea and was hated and rejected by all Korean people as the great leader president Kim Il Sung said
" the Japanese imperialist marauders harshly exploited and repressed the Korean people. They considered ours an "inferior nation", and allowed no Korean to participate in the management of factories, enterprises and state establishments.
The Japanese imperialists took under their wings only a handful of pro-Japanese elements and traitors to the nation who, divorced from the people, had become their faithful stooges.
They tried to destroy our national culture with its 5,000-year old history, and imposed upon our nation the Japanese language, Japanese customs, Japanese culture and the Japanese religion called "Shintoism", for the purpose of paralysing the national consciousness of the Korean people.
With the liberation of our country from Japanese imperialist rule in August 1945, the days of insult and slavery, the bitterness of which penetrated our nation to the bone, came to an end and the wide road to a new life was opened before the Korean people."
(KIM IL SUNG " The Political Situation in North Korea 21st April 1948)
It is quite inconceivable that the DPRK would be in any way influenced by an ideology that regarded Korean's as an inferior nation.
When Korea was liberated in 1945 as a result of the armed struggle led by the great leader President Kim Il Sung  he stated that one of the main tasks confronting the Korean people was to eliminate all traces of Japanese
imperialism
"At present, the Korean revolution is at a stage where it must sweep away the survivals of Japanese imperialism and feudalism and build a new, democratic society, that is, at the stage of anti-imperialist, anti-feudal democratic revolution."
(KIM IL SUNG "On the Question of the National United Front" 22 December 1945)

Furthermore he stated 'that the general ideological mobilization campaign for nation building was a great ideological transformation to eliminate all degenerate and decadent customs and attitudes to life, a leftover from Japanese imperi­alism, fully develop the spirit and features, morality and fighting efficiency required of the workers of a new and democratic Korea, and create whole­some and vibrant national stamina. He instructed that this campaign be con­ducted by the methods of ideological struggle and ideological education in close combination with the people’s practical struggle to build the new country.'
(KIM IL SUNG CONDENSED BIOGRAPHY 2001).
In the DPRK all traces of Japanese rule were obliterated. However in south Korea the US occupiers made the former collaborators of Japanese imperialism their collaborators and gave them high positions. One of them was Park Chung Hee the military fascist dictator of the 60s and 70s who was a lieutenant  in the Japanese Army (his daughter Park Geun Hye is now the chief executive of south Korea). In south Korea laws such as the repressive "NationalSecurity Law" are modelled on the old Japanese colonial laws . It is south Korea which has been experienced several decades of fascist rule both civilian and military . Ironically this is where Mr Myers is teaching and receiving a salary (we wonder  just how much he is paid by the south Korean puppets).from the south Korean fascist state. One wonders how he can have the face to talk about fascism.
Myer's argument is a clumsy and intellectual fraudulent which actually equates 'nationalism' or chauvinism in imperialist countries with the anti-imperialist revolutionary nationalism of oppressed countries. Thus in the twisted world view of Mr Myers the victim is seen as the same as the aggressor.
In today's world it is actually US imperialism that represents a form of fascism or international dictatorship  as it tries to impose its will on the world through its so-called "New World Order " and its "coca-cola-isation and "McDonald-isation " which tries to obliterate the culture and national identities of other countries. The US imperialists seek to 'globalise' the world and create a world state.  The DPRK is one of the few countries to stand up to this and should be applauded.
The idea of Mr Myers on the DPRK being somehow rooted in Japanese fascism is also a modern form of the old Cold War myth created by the ideologists of the CIA that somehow communism and fascism are the same.
Myers tries to tar the DPRK with the brush of chauvinism and racial nationalism.However the great leader comrade Kim Jong Il made it clear that this was not the case
" We should distinguish clearly between true nationalism that loves the nation and defends its interests and bourgeois nationalism that advocates the interests of the bourgeois class. Bourgeois nationalism reveals itself as national egoism, national exclusivism and big- power chauvinism in the relationship between countries and nations; it is reactionary in that it creates antagonism and disagreement between countries and nations, and checks the development of friendly relations between the various peoples of the world."
(KIM JONG IL "On Having a correct understanding of Nationalism" 26 & 28
February 2002)

Moreover
"the excellence of our nation that we emphasise has nothing in common with with racism or national chauvinism.
We do not assert that Korean's biological constitution is more developed than those of other races. Defining the superiority of a nation according to biological or ethnic characeristics is the practice of reactionary bourgeois
'ethnology"
('KIM JONG IL "Let Us Highly Display the Korean-Nation First Spirit 28 December 1989)
and
"Reactionary racism and national chauvinism which were used by the imperialists as ideological instruments of aggression and domination have been rejected by progressive humanity.....our nation first idea which is thoroughly opposed to reactionary racism, national chauvinism and cosmopolitanism not only values the the good traits of different nations but also respects the independence of other nations"

(KIM JONG IL "Let Us Highly Display the Korean-Nation First Spirit 28 December 1989).
In the DPRK there are some non-Korean residents living there notably Joe Dresnock the US defector. There are some mixed race people in the DPRK. Leader Kim Jong Il strongly argued against any form of discrimination against
mixed race people in the DPRK. Non Koreans are permitted to obtain DPRK
nationality through the DPRK nationality law.
The DPRK has a very proud internationalist record. It has assisted many liberation struggles throughout the world and given material assistance to some countries. Foreign guests to the DPRK always receive a warm welcome.This the reality of the DPRK .
Myers's book draws heavily on DPRK novels and also DPRK comic books aimed at teenagers. Has any tried to do an analysis of US foreign policy or US society using "Superman " or "Batman " comics or maybe American
computer games ?
At the end of the day "The Cleanest Race " is  a poorly researched book . It is the worst kind of bourgeois academic falsification and slander. One guesses thatMr Myers has to serve the people paying his salary i.e the south Korean
authorities .
UK KFA
ASSPUK
JISGE