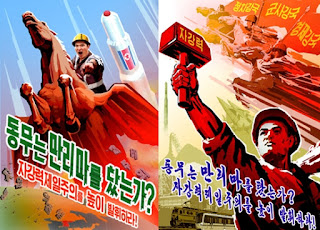 Something that is being shared a lot and commented on is a report from the south Korean puppet Bank of Korea about the DPRK economy . The headline in Reuters says "North Korea 2016 economic growth at 17-year high despite sanctions: South Korea" . This news is being carried by all sorts of news outlets  even the every right wing  "The Daily Mail".
In fact the 3.9 per cent figure, that is quoted by the media for  the DPRK's economic growth is actually a gross underestimate . The real figure is much higher than that , probably several times that. The DPRK media have reported increases in industrial output value for several industries as being 20 per or 30 per cent year on increases . For example during the 70 Day Campaign in the spring of 2016 industrial out value shot up by 1.6 times or 60 per cent as compared to the previous year. So the figures produced by the south Korean puppets are actually very mean indeed and do not accurately reflect the high speed growth of the DPRK economy.
In the past the DPRK raced ahead at Chollima speed (Chollima being a mythical horse that could cover a 1,000 kilometres in one day , now the Korean people under the leadership of dear respected Marshal KIM JONG UN have created a new speed , Mallima speed (Mallima is said to fly 10,000 kilometres per day) 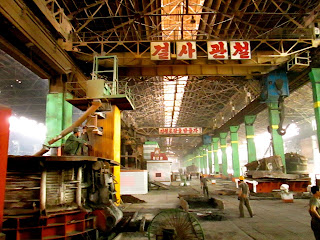 What they are not telling people is even the grudging 3.9 per cent figure is higher than the 2.7 per cent growth claimed for the south Korean puppet economy , about 40 per cent higher .In fact the reactionaries do not know that the term “Korean Miracle “ was first used by the famous Cambridge economist  Professor Joan V Robinson to describe the DPRK . Writing the highly respected journal "Monthly Review " in 1964 that she said that“"Eleven years ago in Pyongyang there was not one stone standing upon another. (They reckon that one bomb, of a ton or more, was dropped per head of population.) Now a modern city of a million inhabitants stands on two sides of the wide river, with broad tree-lined streets of five-story blocks, public buildings, a stadium, theatres (one underground surviving from the war) and a super-de luxe hotel. The industrial sector comprises a number of up-to-date textile mills and a textile machinery plant. The wide sweep of the river and little tree-clad hills preserved as parks provide agreeable vistas. There are some patches of small gray and white houses hastily built from rubble, but even there the lanes are clean, and light and water are laid on. A city without slums."”
The highly respected UK social scientist Malcolm Caldwell who was a lecturer at School of Oriental and African Studies . In his book "The Wealth of Some Nations " he notes that from 1954 to 1970/71 the DPRK rate of industrial output growth was 23.5% whereas that of south Korea was 15.3% so the DPRKs rate of growth was over 50 % higher(siimilar to now)
It is worth pointing that the DPRK has enjoyed 17 years of straight economic growth and was unaffected by the 2008 crisis of the capitalist countries. Unlike south Korea, the DPRK did not need to be bailed out by the IMF. In fact the DPRK does not know austerity.
The various media commentators  do correctly point out that the DPRK's economic growth has been achieved despite sanctions. However they do not go deep enough in their analysis . Not only is the DPRK's economic growth higher than that of south Korea but most importantly it is self-reliant economic growth, the basic engine for the DPRK's growth is the Juche-based independent national economy, whereas as south Korea's "growth " is based entirely on foreign capital and loans .
Finally , in the DPRK economic growth is used entirely for the people's , it goes to increasing wages, building new housing , schools and hospital whereas in south Korea and other capitalist countries any money from increased economic growth goes into the pockets of the capitalists. Also in south Korea ,which is most perverse and crazy place , money from south Korean taxpayers is paid to the US Army for so upkeep expenses  so that economic growth in south Korea not only benefits local and international capitalists but also the US imperialist occupation army . Visiting the DPRK over a five year period from 2012 to 2017 I have witnessed whole new streets ,which are in effect the size of small towns, such as Changjon Street, Mirae Scientists Street and Ryomyong Street being constructed and completed. In the DPRK people's real wages are augmented by stuff like free housing as well as free medical care etc.
So basically even figures from the south Korean puppets and the capialist media prove what we in the Association for the Study of Songun Politics , Juche Idea Study Group of England and UK Korean Friendship Association have known for a very long time : that the Juche-based independent national economy is superior . Juche-based economics work and deliver a high growth rate.

Respected sir,
May I have your email ID?