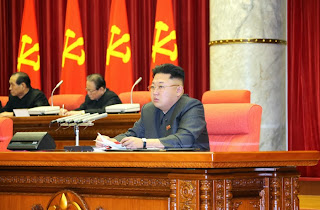 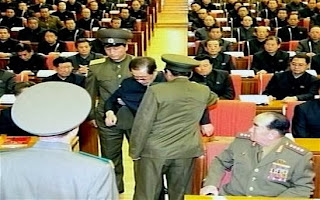 Recently, on the 8th of December an enlarged meeting of the Political Bureau of the Workers' Party of Korea was held under the guidance of dear respected Marshal Kim Jong Un the First Secretary of the WPK . At the meeting the crimes of the counter-revolutionary anti-party factional clique of traitor Jang Song Thaek were laid bare so the meeting decided  to remove Jang from all of his positions and expel him from the party.
Jang is a counter -revolutionary criminal who schemed in a most two-faced  manner  to restore capitalism in the DPRK and make the DPRK either a colony of the US or a satellite state of a certain big power. Jang had been sabotaging parts of the DPRK independent national economy  over a period of time, even selling off the resources of the DPRK at a low price and disrupting the  production of Juche steel, Juche fertiliser and Juche vinalon . Furthermore as the KCNA report of the December 8th Political Bureau of the WPK says
" The Jang group weakened the party's guidance over judicial, prosecution and people's security bodies, bringing very harmful consequences to the work for protecting the social system, policies and people.
Such acts are nothing but counter-revolutionary, unpopular criminal acts of giving up the class struggle and paralyzing the function of popular democratic dictatorship, yielding to the offensive of the hostile forces to stifle the DPRK." (KCNA)

The struggle for building socialism is always accompanied by a fierce class struggle  in which there can be no compromise or concession .

Jang was clearly a capitalist-roader " who    Affected by the capitalist way of living, Jang committed irregularities and corruption and led a dissolute and depraved life."(KCNA)

The DPRK has a proud history of class struggle , a struggle against counter-revolutionary elements . During the fierce Fatherland Liberation War(Korean  war ) the Pak Hong Yon-Li Sung Yop spy clique who were agents of the US imperialist Central Intelligence Agency betrayed the country , caused losses in the war and  planned to overthrow the leadership. The great revolutionary leader generalissimo Kim Il Sung smashed them and saved the DPRK from being sold out to US imperialism and turned into a colony of the US. In 1956 when modern revisionism reared its ugly head in the international communist movement a factional clique planned to overthrow the supreme leadership of the DPRK and declare Korea a pro American 'neutral nation' . The great leader comrade Kim Il Sung exposed and defeated these factionalists and went deep amongst the people and got their support.

The workers in the Kangson Steel Plant told Kim Il Sung that if the factionalists were sent to them, they would throw them into the electric furnace, and a granny in Taesong Village told him; “Premier, after all, it’s we who will win, and not the factionalist rogues, you see? Don’t worry. We support you.” These were expressions of the steely conviction and will of the entire people of the country. Through the struggle against factionalism the purity of the Party ranks was secured all the more, and the unity and cohesion of the Party and revolutionary ranks was made unbreakable.
Now the counter -revolutionary Jang Song Thaek faction have tried to overthrow to destroy the DPRK from within and restore capitalism . However their  exposure , defeat and purge is most timely. Dear respected Marshal Kim Jong Un has struck a telling blow at them. This shows the great intelligence and  foresight  of dear respected Marshal Kim Jong Un who is following in the  footsteps of the great leaders generalissimo Kim Il Sung and generalissimo  Kim Jong Il.
Other socialist countries were not so fortunate as the DPRK . In the Soviet Union Khruschov slandered Stalin , abandoned the dicatorship of the proletariat and compromised with US imperialism . Socialism was crippled in the USSR , later it was finally destroyed from  within by traitors like Gorbachov and Yeltsin . The same thing happened in a number of other countries. However had these countries being ideologically strong like the DPRK and had leaders like the great leader president Kim Il Sung , the great leader comrade Kim Jong Il and dear respected Marshal Kim Jong Un , then traitors like Gorbachov would have been exposed and destroyed ,so there would have no frustration of socialism in  1989-1991 and there would have been a 1 billion strong socialist camp standing in confrontation with imperialism. Indeed militant communists and true  socialists are saying with a sigh ,  " if only the USSR had been like the DPRK and Gorbachov had been purged ". The exposure and defeat of the counter-revolutionary Jang Song Thaek is a bold and decisive revolutionary measure taken by the dear respected leader Marshal Kim Jong Un . It is a great revolutionary victory that gives hope to the people of the world who aspire after socialism.
The most dangerous enemy that a country and a party can face is the enemy within , the hidden unseen enemy that works ,hand in  glove with the imperialists and class enemies , behind the scenes to frustrate and destroy socialism. The DPRK knows this lesson well but in other countries it was ignored. The DPRK under the Songun-based revolutionary leadership of dear respected Marshal Kim Jong Un is strong enough to defeat the enemy within.
Some bourgeois so-called experts are prattling about "perestroika in reverse " , let these idiots prattle because "perestroika " was a complete disaster than destroyed socialism , a "reverse perestroika " will strengthen it.      Cleansing the party and society of the counter-revolutionary factionalist gang will speed up socialist construction and strengthen the country. As the great leader president Kim Il Sung said
"All these traitors ended their days in misery. But did those revolutions get frustrated or retreat because of their betrayals? Each time the turncoats were removed, the revolution developed and surged up with fresh vitality. After the removal of Trotsky, how remarkably socialist construction was promoted in the Soviet Union! Trotsky thought that without him, everything Stalin did would fail, and the Soviet state would go to ruin. But the Soviet people built their country up to be the leading socialist power in the world, as well as a global power. After Zhang Guo-tao deserted the CPC and became a Kuo- mintang parasite, the Chinese revolution did not wane; on the contrary it continued its upward spiral and achieved nation-wide victory.


Though Rim Su San, after defecting to the enemy, divulged the secrets of our Headquarters and did us harm as a guide for the enemy “punitive” forces, the KPRA became neither weakened nor disrupted. Our ranks united more solidly and our revolution, preserving its own purity, made a strong dash towards its ultimate victory.


Traitors to the revolution also appeared during socialist construction in our country after the war. Choe Chang Ik, Yun Kong Hum, Ri Phil Gyu and others attempted to place obstacles in the way of our people’s forward movement. Having failed to realize their factional scheme, they chose to betray the Party and their motherland. As they dropped away, our revolution made a fresh upsurge and ushered in the era of Chollima. Since then the world has called our country Chollima Korea."
(KIM IL SUNG "With the Century "
Now the counter-revolutionary traitor group has gone the DPRK will make a fresh surge forward under the banner of self-reliance, independence and Socialism  under the intelligent leadership of dear respected Marshal Kim Jong Un.